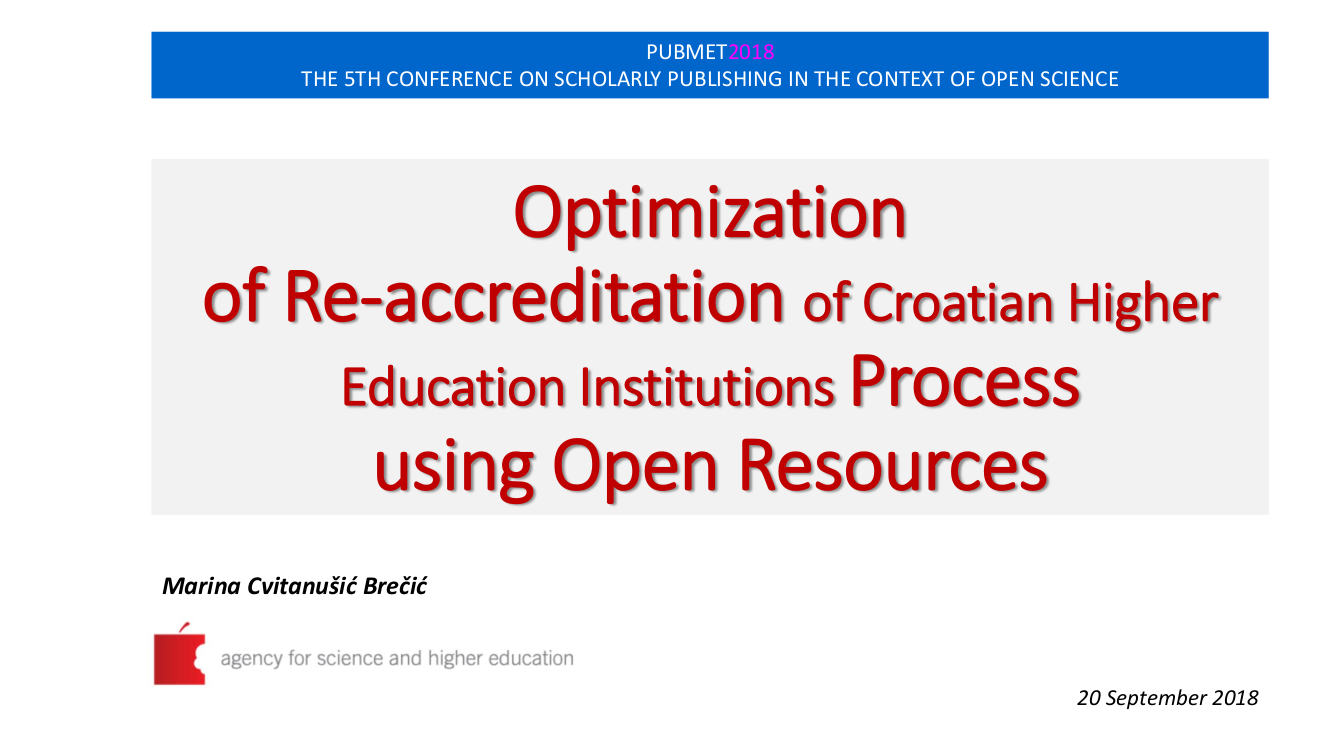 Systematic quality assurance in higher education and science in Croatia began in 2010 with the procedure of re-accreditation (1) of higher education institutions (HEIs) conducted by the Agency for Science and Higher Education (ASHE). Prior to 2010, similar procedures have been conducted in Croatia, but they had never been systematically carried out for all HEIs, by using the same criteria and European context. In the period 2010-2016, ASHE has re-accredited all public and private HEIs in Croatia in accordance with the national regulations, but also in line with The Standards and Guidelines for Quality Assurance in the European Higher Education Area (ESG) (2). Within the legally prescribed procedure of re-accreditation, submission of an immense amount of data is required on all aspects of institution’s activities. Evaluation criteria are divided into 5 assessment areas, each consisting of several standards. Areas evaluated are:I) Internal quality assurance and the social role of the higher education institution, II) Study programmes, III) Teaching process and student support, IV) Teaching and institutional capacities and V) Scientific/artistic activity. Due to the different characteristics of different types of HEIs, criteria for evaluation of universities and its constituents somewhat differ from criteria for polytechnics and colleges, mainly regarding teaching process and research.Collecting and analysing data on HEIs activities was found the most demanding and time-consuming part of the procedure, both for HEIs and ASHE. In order to optimize the re-accreditation process and to facilitate the delivery of HEI data, the existing ASHE information system for data collection – MOZVAG (3) had to be upgraded. Optimization of data collection in the re-accreditation process was done in 2017 through MOZVAG reconstruction, within the EU co-financed SKAZVO project (4). Within this project, workshops and consultations were organised with MOZVAG users at HEIs, and their feedback taken into account in system upgrade. The upgrade included more modules for entering the required data in the re-accreditation process, and possibility to take certain data-sets from other existing sources used by HEIs. Data on study programmes and teaching staff are primarily transferred from the ISVU system, used by most Croatian HEIs for recording teaching process. Data on scientific production (bibliography) of HEIs can be entered directly in MOZVAG, but in cooperation with the Ruđer Bošković Institute and Croatian University Computing Centre – Srce, additional efforts have been made to make The Croatian Scientific Bibliography database – CROSBI (5) more attractive to users, in a way that it was made possible to transfer data-sets from CROSBI to MOZVAG for those HEIs that compile and update their data in CROSBI. It prompted HEIs to use CROSBI and make information about their scientific activities (more) publicly available.Additionally, redundancy of data was avoided because data is entered only once, in one database, from where it can be transferred to MOZVAG for the purposes of evaluation. The testing phase of the new MOZVAG system was carried out in late 2017 and early 2018. An upgraded system was tested on 7 HEIs of different profiles (5 faculties, 1 college and 1 polytechnic), after which additional improvements were made. All HEIs undergoing reaccreditation in 2018 are using the new system. Integration of MOZVAG with the existing databases and feeding data directly into the information system instead of providing them in the form of tables within a document, has made a huge and important step forward in data analysis, both at the level of HEIs and the entire system of higher education in Croatia. The benefit of system upgrades for HEIs is primarily the automatic creation and formatting of data tables that are required in the re-accreditation process. While ISVU is a closed information system, whereby data is owned by a HEI, CROSBI is an open platform where data is publicly available and provided by users themselves. This was the reason why CROSBI was recognised as a great potential source of information on scientific production and research activities, notonly for the re-accreditation purposes, but also for achieving the goals of Open Access and Digital Single Market. During the upgrade of MOZVAG and through discussions on possible re-use of existing data in other databases used by HEIs, a great potential was seen for future improvements and integration. In addition to CROSBI, some other information (re)sources were found potentially interesting for the integration with MOZVAG and other ASHE databases.Some of them are Database of Croatian scientists “Who is who in Croatian Science”, Projects database and Database of Scientific Equipment and Instruments (Šestar), all maintained by the Ruđer Bošković Institute. All these databases have a common disadvantage – they are used on,more or less, voluntary basis; as a result, they are not comprehensive or regularly updated, and have data missing. Additional problem identified was a lack of unambiguous or clear definitions for certain data that need to be analysed (e.g. what exactly is a “scientific” vs.”professional” project, or how to distinguish “internationally renowned prominent scientists”with no relevant criteria provided). Hopefully, most of the mentioned issues will be resolved with development of Information system on Croatian Scientific Activity (CroRIS) that is being developed by Croatian Ministry of Science and Education and Srce, within EU funded project”Scientific and Technological Prediction”. Upgrade of the MOZVAG system showed that investing in better IT tools and integration of already existing sources of information is possible and desirable. If we want to improve the quality of data and information across the entire higher education sector, and consequently the quality of data used in re-accreditation,integration between different (and possibly already existing) sources of data is a prerequisite for ensuring well-informed decisions, both in quality assurance procedures and future strategic planning in this sector.